HomeNewsFALSE: This photo does not show a thief nabbed in Shanzu, Kenya
News

FALSE: This photo does not show a thief nabbed in Shanzu, Kenya 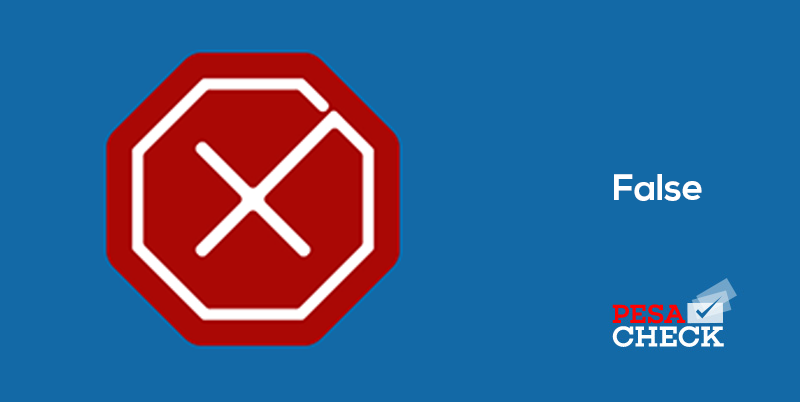 A reverse image search shows that the man is from Zimbabwe, not Kenya.

This Facebook post claiming to show a thief who was arrested at Shanzu in Mombasa County, Kenya, is FALSE. 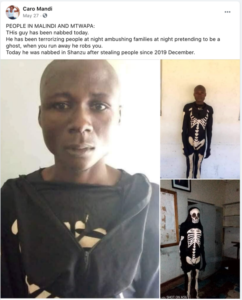 The Facebook post informs Malindi and Mtwapa residents they can breathe a sigh of relief after the arrest of a thief who has been terrorising them since December 2019.

“PEOPLE IN MALINDI AND MTWAPA: This guy has been nabbed today. He has been terrorizing people at night ambushing families at night pretending to be a ghost, when you run away he robs you. Today he was nabbed in Shanzu after stealing people since 2019 December,” the post, which was published on 27 May 2021, states.

Three images of the alleged thief in a black skeleton costume are attached. A reverse image search by PesaCheck found that the man is not Kenyan but Zimbabwean. 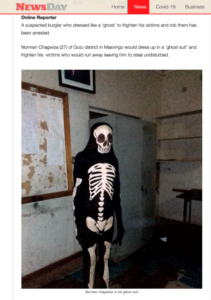 NewsDay, a Zimbabwean website, identified the man in the ghost suit as Norman Chagwiza of Gutu district in Masvingo. According to the Zimbabwean publication, the 27-year-old is a burglar who dresses up in a ghost suit to scare his victims. Once the victims see him, they flee, giving him ample time to steal their valuables.

Zimbabwean National police spokesperson Paul Nyathi confirmed to NewsDay that Chagwiza had been arrested due to burglary. According to the publication, Chagwiza had robbed two homesteads using the same tactic of wearing a ghost-like suit.

“He stole a ladder at a certain homestead, then in another incident, he locked the door from outside while trying to steal solar panels, but the owner of the house broke the door and ran after him and he was caught,” Nyathi told NewsDay.

“Zimbabwean thieves have become cunning and creative! This guy was breaking into people’s homes in Gutu, pretending to be a ghost. His victims would run away consumed with the fear of having seen a ghost, then he would help himself to their property! Fortunately he was arrested,” the award-winning journalist wrote.

PesaCheck has looked into a Facebook post claiming to show a thief who was arrested at Shanzu in Mombasa County, Kenya, and finds it to be FALSE.

By partnering with Facebook and similar social media platforms, third-party fact-checking organisations like PesaCheck are helping to sort fact from fiction. We do this by giving the public deeper insight and context to posts they see in their social media feeds.

Have you spotted what you think is fake news or false information on Facebook? Here’s how you can report. And, here’s more information on PesaCheck’s methodology for fact-checking questionable content.

This fact-check was written by PesaCheck fact-checker Naomi Wanjiku and edited by PesaCheck chief copy editor Rose Lukalo. The article was approved for publication by managing editor Enock Nyariki.

PesaCheck is East Africa’s first public finance fact-checking initiative. It was co-founded by Catherine Gicheru and Justin Arenstein, and is being incubated by the continent’s largest civic technology and data journalism accelerator: Code for Africa. It seeks to help the public separate fact from fiction in public pronouncements about the numbers that shape our world, with a special emphasis on pronouncements about public finances that shape government’s delivery of Sustainable Development Goals (SDG) public services, such as healthcare, rural development and access to water / sanitation. PesaCheck also tests the accuracy of media reportage. To find out more about the project, visit pesacheck.org.

PesaCheck is an initiative of Code for Africa, through its innovateAFRICA fund, with support from Deutsche Welle Akademie, in partnership with a coalition of local African media and other civic watchdog organisations.

Share
Facebook
Twitter
Pinterest
WhatsApp
Previous articlePARTLY FALSE: There is no scientific evidence that Jatropha curcas and cassava can cure HIV, but black seed has shown potential
Next articleFALSE: Kenya’s examination council is not offering sponsorship for trainee teachers 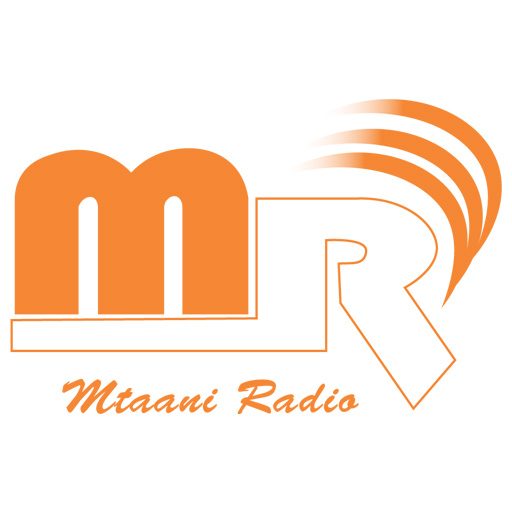